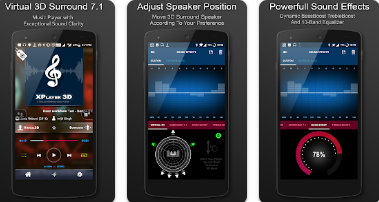 3D Surround Music Player is an application categorized under “Music & Audio” in Google play store. This app developed by Tamal Basak and has content applicable for individuals aged 3+. The app is compatible with smart phones with android version 4.4and above and was last updated on June 8,The latest build of the app is 1.7.01 with a size of 9.0Mb. The app has in-app purchases that further enhance the user experience. This application has more than 1,000,000 installs and has been reviewed by more than 47,080 users giving it a 4.2 rating in the Google play store.

The ability to play music is one of the key features in mobile phones since its inception in the early 2000’s. A Smartphone without the ability to play music is not really a Smartphone. It is a feature that is essential and always expected in every Smartphone that is released. A lot of times smart phones don’t give much emphasis on creating a visually appealing and easy to use music player on their devices. This is often overlooked and ignored. The end results may be some unpleasant glitchy music player with minimal features.

 Virtual 3D Surround Effects: 3D audio effects are a group of sound effects that manipulate the sound produced by stereo speakers, surround-sound speakers, speaker-arrays, or headphones. The user will feel like the sound is coming from particular direction which is amazing when you have good quality earphones.
 Dynamic Bass Boost: The Dynamic Bass Boost provides more bass than higher levels.
 Treble Boost: A treble booster is used to get high volumes in the high end tonal spectrum.
 10-Band Equaliser: Gives you the option to tinker with pretty much everything in your music playback experience. You can adjust and control every aspect including flat, acoustic, hip-hop, rock, deep and many more
With 3D Surround Music Player can use the app like a karaoke using itsfeature to display lyrics. You can also connect the device to your TV through chrome cast.

Everything you could want for in a music application is present in this very tidy app. This app is perfect for all music lovers. The app also boasts a very intelligent music library. Create playlists, filter by album, artist, genre, composer, year. Also create folders and make custom work out and dance albums. The easy to operate and classy finish of the app really gives it a minimalistic look yet looking trendy.