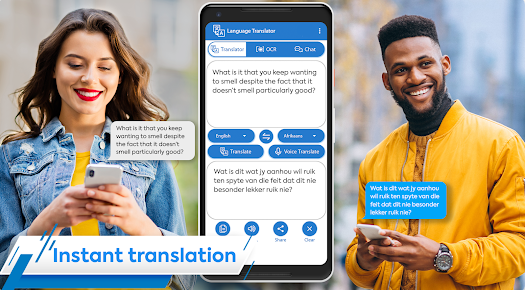 Our technologies help the world to get connected effectively regardless how far they are. World comes under an umbrella. Still there are some barriers of language, culture, economy etc. All other can ignore and overcome but we have to take care of languages. In total, there are about 6500 languages in the world. Many people only speak single languages. Here comes the important of translators, commonly and widely speaking languages also can help world to communicate. Human translators are not handy and economical, so we can try an application which helps in translation process, named ‘All Languages Translator’ offered by Mobile Translator Apps. Through this, we can translate over hundreds of languages. Application was released on 29 March 2019 and got a warm welcome from users. Within an year, it has got 19 million plus downloads. Rated 4.4 on Playstore with 71K reviews. Application is only about 6MB in size.

All Languages Translator App can translate words with speak and voice recognition. This is one of top rated application in Playstore for translation purpose. This application is totally free and can translate your words by voice recognition. So can easily take notes by speaking. This translator designed to work with all languages. So speak translation let you to speak in any languages and converted to the desired languages. You can also study international languages with native language only. Any coaching not required and can save some bucks on that.  We can translate text to speech and voice to text etc. This application also let you serve for online services and interpret various languages. In a fun way, translator helps you to study and build your vocabulary efficiently. Offline translation also can done and which helps you to learn whenever you want.