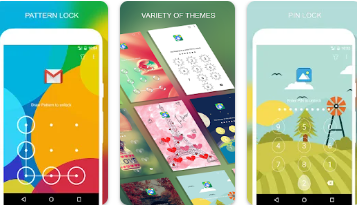 AppLock Master is an application that helps to lock apps in a device with pin, pattern or finger print.

AppLock Master app comes under the category of tools in the Google play store. The app is developed by AMMY Entertainment and it requires an android device. The app is last updated on 20th November 2019. The current version of the app also varies with device and it has got 1,000,000+ installs in the play store. The size of the app varies with the device used. The app can be used by individuals aged 3 and above. The app has been reviewed by 19,989 users and it has got 4.2 rating in Google play store.

This is an application that ensures security of the device by locking various apps installed in the phone with pin, pattern of finger print of the user and it takes the photo of the person who tries to unlock the device.

Key Features of the app

It can be used by any of the following 3 ways:-

How to use time PIN?
Device’s time will combine with the PIN at the end. For example if the time is 19:02 1902 will be the PIN ( is the original PIN set by the user)
AppLock uses the device administrator permission in order to prevent AppLock from being uninstalled.

Drawbacks of the app

The finger print app lock works only with Samsung phones.
Users have detected many bugs such as the app not working every time which creates security issues.
But it is still recommended as one of the best privacy protector app which is light, simple and ads free. It supports hide photos and videos from SD card also. It gives protection and security in extraordinary ways. It protects the applications which the users use on a daily basis such as messages, emails, Facebook chats, incoming calls and contacts. It is a very fast and light app. It only takes up only 40% phone memory compared to other similar apps.