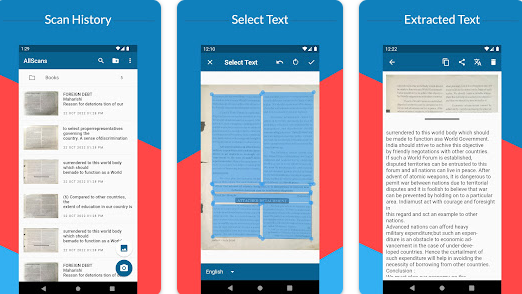 OCR Text Scanner : Convert an image to text is an application categorized under “Productivity” in Google play store. This app is developed by Rishi Apps and has content applicable for individuals aged 3+. The app is compatible with android version 4.1 and up and it was last updated on September 29, 2019. The current version of the app is 1.9.6 and size of the application 4.0Mb.  It is available in Google Play Store It has in-app purchases worth 210 rupees which enhances the user experience. This application has more than 500,000 installs and has been reviewed by more than 5,700 users giving it a 4.2 rating in the Google play store.

Optical character recognition or optical character reader (OCR) is the digital or mechanical translation of typed, handwritten or printed text images into machine-encoded text, whether from a scanned document, a document photograph, a scene photograph (such as a text on signs and billboards in a landscape photograph) or a subtitle text superimposed on a frame. This is usually a difficult task as most of such images can be very difficult to read even. Most applications that boasts this feature have very low accuracy when converting the text. OCR-Text Scanner is app that recognizes the characters and words from an image/PDF with high 99%accuracy. It converts your smart phone to text scanner and translator.

Extract Text On Image – Upload the image to the app and let it do its job. Within seconds you will be able to convert the said image into text

Translate text to over 100+ languages – you can literally convert almost all languages known to mankind, how cool is that?

Copy – Text on Screen- after the conversion you can copy the text and paste it anywhere you want.

Scan history- users will get a comprehensive scan history so that they don’t miss out on important documents that were previously converted.

With everything being migrated into the online world people are slowly loosing the need to keep text documents and other official papers. It is becoming increasingly evident that soon everything will be online. In this wake of an era this app is incredibly useful to have. You can literally convert all your old documents into readable text and store it online. This app is a must have for the current generation.