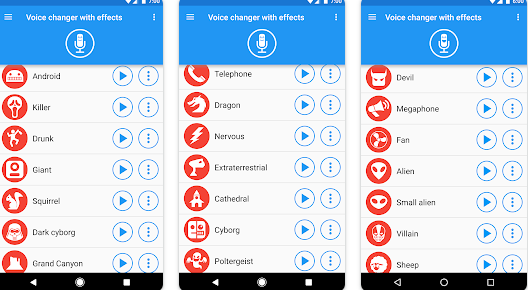 Voice Changer with Effects is an app meant for the users to have a changed voice
and have fun by changing the voice. Users can record their voice, apply effects and share with their friends for added fun. The app includes more than 40 effects which include Helium, Robot, giant, backwards, monster, extra-terrestrial, zombie, alien,squirrel, drunk and many more.

Voice Changer with Effects App comes under the category of Entertainment in the
Google play store. The app is developed by Baviux. It requires an android device
of 4.1 and up. The app is last updated on 12 th December 2019. The current version
of the app is 3.7.5 and it has got 100,000,000+ installs in the play store. The size of
the app is 9.5M. The app can be used by individuals aged 3 and above. The app has been reviewed by 1,352,059 users and it has got 4.5 rating in Google play store.
Interactive elements are enabled in the app. Digital purchase is also enabled in the app. In app products can be purchased at the rate of 179.99 rupees per item.

Key features of the App

Drawbacks of the app